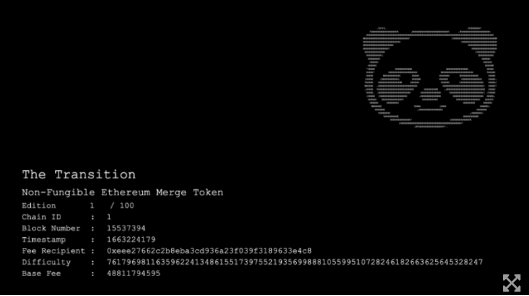 Last week, Ethereum‘s merger, “The Merge,” was activated, and the transaction of the first NTF after it cost $60,000 in fees.

Criticism of “The Merge” has been quick to follow after the merger was initiated today on the Ethereum network. The first NFT transaction has cost in fees of $60,000 or 36.8 ETH, according to James Hunt on The Block.

Total terminal difficulty, a measure of cumulative mining difficulty on the Ethereum network, was achieved on block 15537393 at 6:42:42 am UTC the 15 setember, triggering the transition to proof of stake.

In just 17 seconds, the first NFT was minted on Ethereum with proof of stake in the next block. The user paid over 36.8 ETH in transaction fees ($60,626.26) to mint the NFT named “The Transition.” It features an Ethereum panda mascot and is part of a collection of 100 on the OpenSea NFT marketplace.

The NFT also displays key details related to Ethereum, including the difficulty level at the time and a timestamp.

The collection now takes its place in Ethereum history, but this is not the first time the panda mascot has appeared as an NFT, with PandETH minted in early 2019.